I've been wondering if the dive gear express (DGX) 30# single tank wing was the same as the oxycheq Mach V.... guess my suspicion was answered yesterday when I received the one I ordered from DGX. Letmesee here... $199 for the DGX wing (includes shipping, no tax).... $400 for the Oxycheq (doesn't include shipping or tax). Seems whatever manufacture is making these wings for DGX and Oxycheq left both logo tags on my new wing. I wonder if it's a Deep Sea Supply (DSS) product just rebranded? Kinda like OMS (other manufacturers shit). Thankfully the obnoxious yellow oxycheq stitching on both sides isn't there. And I prefer the inflation hose on the DGX wing 10x more than the stiff rubber hose that is offered with the oxycheq wings (and no useless flap covering the elbow):mrgreen:

Thank you for that report. If the DGX is the same quality as the Oxycheq then you got quiet a bargain.

Deep Sea Supply stopped making wings etc a couple of years ago so it's doubtful it is one of their wings re-branded.
A sincere THANK YOU to all at VDH who make this wonderful resource available and to all the thoughtful contributors.

DSS made their own and did not oem any wings for anyone. They did however make the razor sidemount rig but that was it.

I TRIED TO ATTACH A FEW PICTURES BUT IT SEEMS THEY DIDN'T GET POSTED. DOVE IT LAST NIGHT, IT WORKED FANTASTIC. IF YOU ARE LOOKING FOR A STREAMLINED WING AT A GREAT PRICE I WOULD JUMP ON THIS OVER AT THEIR WEBSITE. $199 SHIPPED WAS A GREAT DEAL HIGH QUALITY MATERIALS.

I checked their website and couldn’t find that particular wing. On one of my local shopping sites though, you can get a small 18lb wing from OSR in China. I actually placed an order for one of these wings in woodland camo, but cancelled it since they’re actually slightly larger than the modified wings I have, and the elbow and OPV are welded in place. I just have a preference for user-replaceable parts.
_______________________________
Ed

I have NO affiliation with this website so consider my opinions unbiased
https://www.divegearexpress.com/dgx-gea ... ngles-wing

The inflation elbow is a standard glad fitting and can be replaced if need. The dump valve on the lower left appears to be either glued to the bladder or RF welded and then fed through a hole in the cover, also a standard dump valve with the same threads (Zeagle, scubapro etc.) DGX sells the fitting with gasket as a replacement for something like $9 clams. I know the bladder can be replaced easily, simply unzip the cover and it pops out. Other than that I don't have any other specifics but I'm sure you can message or call DGX and they can give you any other details, they have been really helpful to me in the past. The bladder is a heavy duty black nylon which appears to have dielectric (RF) welded seems, not a plastic bag or coated interior nylon like some BCs have used in the past. The exterior cover is a thick cordura nylon as you would find on the Oxycheq donuts... did I mention the manufacture left the OxyCheq logo tag on the one I got? Pretty certain they don't just slap random OMS tags on these when shipping them to DGX so I'd say they are the same as the MACH V, of course without the disco Oxycheq writing down both sides which is a plus 1 for me. And the customer service and shipping I received from DGX was excellent compared to some of the stories I've heard buddies of mine have had from Oxycheq, and that was back when the guy was somewhat local based in Aqua Dulce Kalifornia. To each there own I guess, I am very satisfied with my purchase and have zero qualms about recommending this doughnut/wing DGX sells. I've tried posting pictures of it but they don't seem to make the post once uploaded, sorry about that.

Looks like DGX copied the Argonaut wing and got it made overseas at a cheap price. I can't even buy the wing I have made here in the states for that price.
They have the roll control but haven't put in the feature that keeps the wing compact when it's not inflated but other than that it's almost a duplicate.
Doing it right should include some common sense, not just blindly following specs and instructions. .Gary D, AWAP on SB

That could very well be, dunno. But what baffles me is the Oxycheg logo is sewn in above the typical warnings and lift rating label... and it is Made N 'Merica, has that tag sewn in as well so it's not an overseas knock-off. Go figure.

Several years ago I was visiting with a friend who worked for a large dive gear mfg. and he gave me a tour of the whole facility. R&D testing, salt bath, heat and cold, cycling, wear testing etc. Staff assembling and testing regulators, sewing outer shells, dies and molding equipment for the bladders clear down to the finished tags.
At the receiving dock there was a trailer being unloaded and a few people opening boxes and randomly pulling out wings for inspection as best I could tell and the wings they were inspecting all had the same tag.... The boxes the wings came out of were a dead giveaway as to their origin although the tags on all the wings were exactly the same.
Not stating or implying anything about the wings in the topic, just sharing what I witnessed myself at a particular location.
Doing it right should include some common sense, not just blindly following specs and instructions. .Gary D, AWAP on SB

A bit off-topic but related...

A few years ago I noticed a BIG change at DUI. I dive a military version of the 50/50 and stopped in one day to get new rock boots (they suck baywater by the way). I noticed a bunch of OMS stuff all over the place and wondered if they had "acquired" OMS as a new brand under the DUI parent. Well I decided to poke around the interweb of lies and found a post from Kathy Long (Dick Long's daughter) from 2018 about the changes happening there and that she had left the company. Dick had come back out of retirement and kinda booted his other daughter Susan out as CEO. You can read about it here https://scubaboard.com/community/thread ... un.549840/

Can't remember all the details but it made me wonder if DUI had acquired or WAS acquired by OMS, seems they had a LOT of other manufacturer's shit just stacked up around the warehouse. And tell me the OMS Slipstream isn't a direct knock-off of the Scubapro Jetfin. Bryan, if you were in the Sandy Eggo I'm pretty sure I know what company you are talking about, I've seen some crazy stuff there too. There was also a company called Deep Outdoors owned by a guy named Robin Jacoway, has since went belly-up. He had a fin called the SevenGill which just so happens to look EXACTLY like the Hollis F2.... yeah, people don't knock-off dive equipment in the states.

I confirmed today these are infact Oxycheq wings (donuts). But I think the inflator, corrugated hose and elbow are DGX parts.

. But I have a VDH 18 wing (and a 22#) and I have an Oxy 18 wing and they are not the same. Inflated or deflated, the Oxy 18 is longer and more narrow when compared to the VDH wing. And the Oxy does not have the internal retraction bungee. Construction, the Oxy 18 seems a little heavier built but some of that is due to having a polyvinyl bladder. The VDH wing is amazingly small and lighter than the Oxy because it seems to have a textile bladder. I have not taken either of my two VDH wings apart but have dug into my Oxy 18 and 30 several times.

One of the key elements concerning double hose use for the VDH wing is that it seems to have less material across the top loop which allows it to sit cleanly under and behind the can. My Oxy wings work fine with dh, but there is more material there and the wing wants to extrude between the plate and the can. Here you might can see what I am talking about, on the left is the VDH 22# and notice that you cannot see the top of the wing in the cutout. Notice that the Oxy 18# wing and UL plate on the right the wing extends well above the top of the plate. The VDH plate and the Oxy UL plate are the same length top to bottom (center of cut out on the VDH plate). 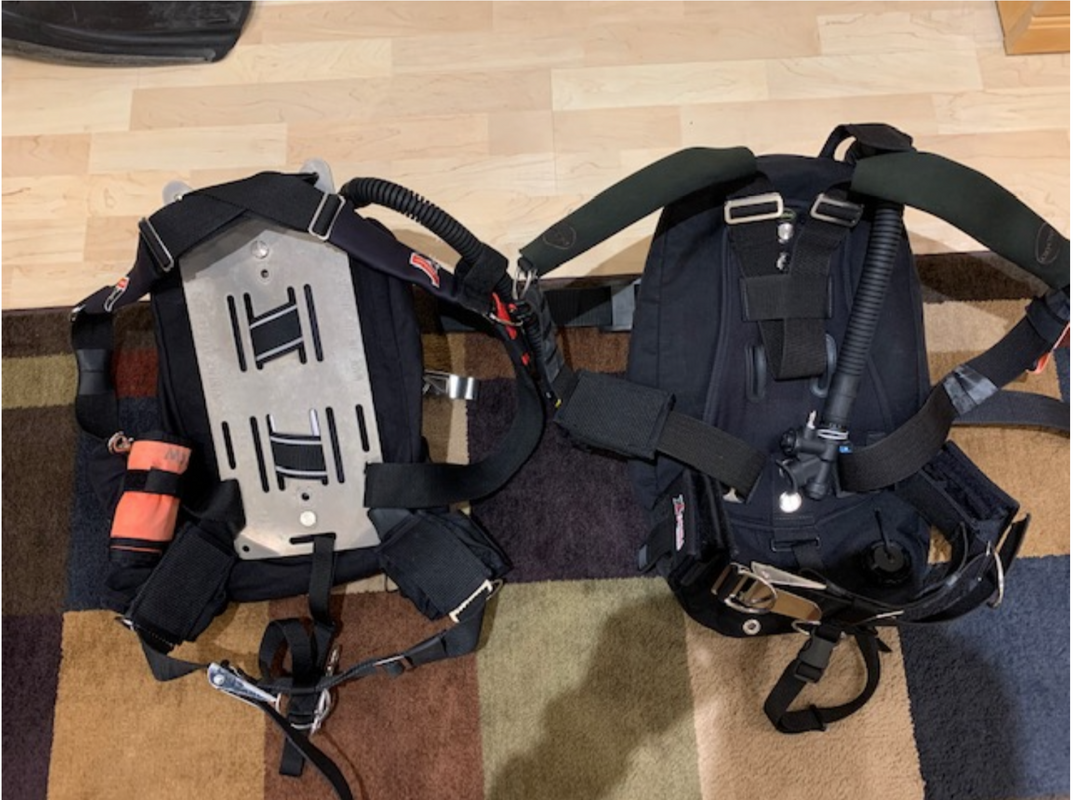 For single hose diving this does not matter but for double hose, the VDH wings that Bryan had made are unequalled by any wing I have come across. Yes, the Oxy wings and similar do work, push them down as low as possible and tuck or roll the top edge of the wing behind the can and be happy, it is fine. At least one well known double hose diver

has tied a piece of cord around the top loop of a fat Zeagle wing to keep it compressed there and that seems to work. But what works best IMO is the VDH wing.

Wing thing lift, I vote 22 pounds if VDH could only market one. The 22 pounds VDH wing retracted is smaller than the Oxy 18 and when inflated it is wider which allows it to fully inflate. The Oxy 18 is so narrow that it is pinched between the metal VDH plate and the tank limiting inflation to about 16 pounds. That is not enough to get my head above the water cleanly with my camera and other equipment, especially in the often rough Gulfstream waters of Jupiter, Florida. The VDH 22 rocks

and that is all I can say there, it is perfect.

In water trim, well, the Oxy 18 trims me better than the VDH 18 and 22. Why, well, there is more wing further aft and the cut (pattern) of the Oxy seems to focus the air further aft. My legs are boney and heavy, what can I say and I doubt the titanium bit help in that regard

I would rather pay more for made in a democracy if not in America. But something is better than nothing, maybe, I guess. Well, sometimes not.

IMG_64432.jpg
The wing I got for $199 (made by Oxycheq or whomever they have make their wings) works GR8 4 me even with the VDH backplate Luis designed. Oxycheq gear is overpriced for what it is as far as I'm concerned, especially if you look at some of his analyzers but if you feel better paying more for it that's fine. 20 dives on this wing and VDH backplate so far, in pretty cold water with drysuit, zero complaints except that I wish I had this wing years ago. The upper tankband slots are fixed but easily adjusted up/down with the BP slots on the VDH plate, the lower band slot has a wide adjust option up/down so it be can used with a AL63 or AL80 while keeping the top of the wing where it works best for a DH. I have yet to use it for buoyancy... even on deep(ish) dives, to each their own I guess. I'll be taking this same setup (minus drysuit and all the BS needed with that) to warmer waters near the equator in the spring.

You do not have the required permissions to view the files attached to this post.
Post Reply
16 posts

Users browsing this forum: No registered users and 12 guests